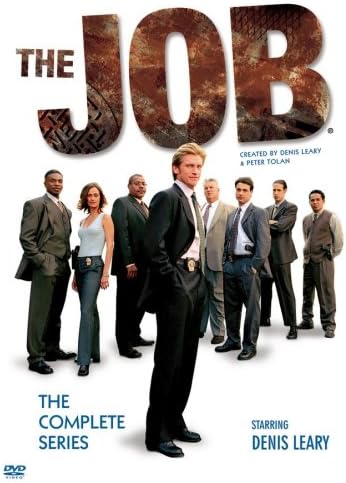 Network television says they want original programs, but they don't always know what to do with them. Case in point: The Job, the late lamented series that lasted but 19 episodes before being unceremoniously yanked by ABC. So long Mike McNeil; we hardly knew ye. But what we did see of Denis Leary's working class anti-hero made for arrestingly funny television. McNeil, a cop, smokes, drinks, pops pills, and juggles a wife and girlfriend. And it's all beginning to catch up with him. "This stuff is Biblical," notes his partner, an African American whom the squad has nicknamed "Pip" (as in Gladys Knight and the...). The Job is not your typical workplace sitcom. There is no laugh track. Based on a real cop whom Leary befriended while researching his role in the remake of The Thomas Crown Affair, The Job has the raw sound, rough language, and gritty look and texture of authenticity. It was shot documentary-style on location in New York. The focus of the series is more personal and less procedural than other cop shows. We get to know intimately this flawed and funny close-knit band of brothers, including straight-arrow Pip (Bill Nunn); Frank (Lenny Clarke), an old school cop and great bear of a man; and Det. Jan Fendrich (Diane Farr), a capable member of this boys' club in the classic Howard Hawks tradition, and who perhaps might have become a love interest for Mike had the series continued.

A series benchmark is "Barbeque," in which an anniversary party hosted by Pip and his commanding wife, Adina, inexorably descends into chaos when McNeil and company disregard Adnia's "no alcohol" edict. Another classic is the episode in which McNeil suspects that Frank is gay. While it does not jibe with Internet episode guides, the episode chronology on this four-disc set builds to a powerful climax, with Mike's girlfriend en route to confront his long-suffering wife (who may herself be having an affair), and Pip considering cheating on Adina with an old flame, all scored to the Ramones' pounding rendition of "Wonderful World." Whether it was ahead of its time, a victim of network neglect and mishandling, or just too dramatically different, The Job was too good for prime time. That it led to Leary's new hit series, Rescue Me, is small comfort. For faithful and frustrated viewers, it's great to have McNeil back on The Job. --Donald Liebenson

Mike McNeil (Denis Leary) is a self-medicating, hard-drinking, decorated New York City detective with a wife, a mistress and a crush on a coworker. Surrounded by a partner and fellow squad members who are just as colorful, McNeil pursues his uniquely unconventional, yet effective, approach to crime solving while attempting to manage the chaos of his personal life.

Originally broadcast on ABC in 2001, The Job was shot entirely on location in New York City, giving the show a gritty look to match its always edgy comedy.